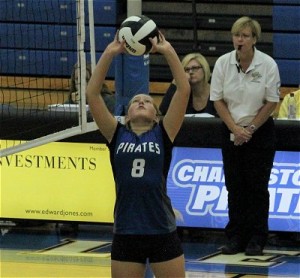 Charlestown Lady Pirate Volleyball improved to 14-10 on the season, while defeating Rock Creek (13-7) for the second straight year Monday evening on the road.  Charlestown won the first set 26-24, but allowed the host Lady Lions to take sets two and three 16-25,  and 16-25 respectively.  Charlestown got back on track taking the third 25-19, then outlasted Rock Creek 16-14 in the tie-breaking set.  The Lady Pirates have won eight of their last nine matches.  “Tonight was a very hard fought match between two competitive teams”, stated Charlestown Head Coach Tammy Nuxoll.  “We started off slow in the first set and found ourselves behind 0-5.  We were able to get back in the game, but had our backs against the wall down 20-24.  Emalee Craven went back to serve and the team rallied to earn 6 service points and win the set 26-24”, added Coach Nuxoll.  The second and third sets the Lady Pirates struggled with passing and putting balls to the floor against the good defense Rock Creek was playing.  “We adjusted the line-up the final two sets to match up better with them offensively, and the team picked up the tempo and stayed focused.  I was proud of the way they pulled through in tight situations in the final set”, said Coach Nuxoll.  The Lady Pirate offense was led Monday evening by Emalee Craven, who recorded 15 kills and Kaia Reid who added 11 kills off of 37 assists from Maddie Nuxoll.  Kiersten James led in blocks with five total, and Chrissa Ledbetter did a nice job passing and led the defense with 27 digs.  “I want us to play with the same focus and determination tomorrow night against Borden; but would like to see more consistency in all aspects of our game”, concluded Coach Nuxoll.  The Charlestown Junior Varsity lost 2-0 to Rock Creek 18-25, & 20-25.