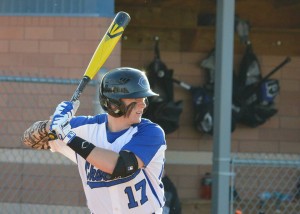 Hours after debuting at #11 in this week’s Class 3A Coaches Poll, the Pirate Baseball team hosted the Class A #17 South Central Rebels Monday evening at Charlestown High School.  Excluding the March 29th set back versus an upstart Columbus East team, the Pirates (4-1) not only beat a second straight ranked team in as many starts; but also displayed some early season pitching depth, seeing their fourth pitcher in five games do damage.  Devon Krueger (1-0) got the win from the mound Monday, striking out seven Rebels, while allowing five hits in 6 1/3 innings.  After a scoreless three and half innings, the Pirates hit their gear scoring twice in the fourth, once in the fifth, and five times in the sixth while cruising to a 8-1 non-conference victory.  Brandon Love finished the game 2 of 4 from the plate with an RBI; while Justin Farris scored two Pirates while going 2-3 from the plate.  “Tonight was a good win against a quality team. South Central always plays a good brand of baseball and it’s good to see our guys play as a team to get the win tonight”, commented Pirate Skipper Ricky Romans.   The Pirates travel to New Albany Tuesday for a 5:30 pm non-conference start verses the Bulldogs. (photo courtesy of Melissa Stewart)