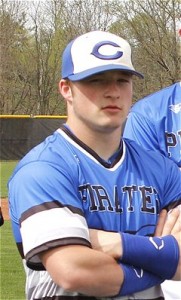 The Pirates made the three hour trek to Oxford, Indiana Saturday to play in the annual Bison Invitational; then made it more than worth their time in topping Western and host Benton Central High School to win the Invitational in convincing style.  Benton Central High School is located just northwest of Lafayette, Indiana; and provided the venue for Senior Pirate Ryan Jones (shown left) to become Charlestown’s All Time Hits Leader.  Jones, who signed to play college ball at Owens Junior College after high school, broke baseball’s big record Saturday with a two run homer in the top of the 3rd inning against Western.  The home run gave Jones hit number 137 for his career; breaking the old record of 136 hits held by former Pirate Cameron Metzger.  Jones will continue to expand his record pace through the rest of the season; as coming into Saturday’s Invitational he sported a .522 batting average after 86 plate appearances this season.

Charlestown squared off with the Western Panthers in their first Bison Invitational match-up; a Class 3A school located east of Lafayette in north central Indiana.  The Pirates fell behind 4-0 early in the contest; however tied the game at four in the top of fourth with help from the Jones’ record breaking two run homer in the third.  The shootout was on for an inning and a half until the top of the seventh, when the Pirates had enough.  The Panthers (9-11) scored two runs in the bottom of four and three in five before being cut off by the Pirate defense.  The Panthers led 9-6 going to the top of the sixth; when the Pirates added three runs in the top of the sixth and six big runs in the top of seven to put Western away for the day.  Senior Dalton Brown (2-2) got the win in relief, pitching three innings, and striking out three.  Charlestown scored 15 runs off 13 hits and committed three errors; while Western scored 9 runs off 10 hits and also committed three errors.  Senior Ryan Jones, in addition to becoming Charlestown’s new All Time Hits Leader, finished 3 of 4 at the plate, including two home runs, five RBI’s and plated four times.  Junior Zach Ramirez finished 4 of 4 in his trips to the plate, scoring three times and batting in two more runs. 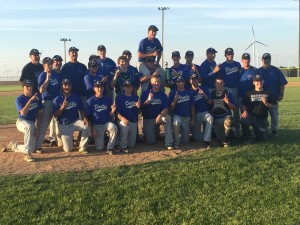 The 15-9 win over Western advanced the Pirates to meet the host Bison in the Invitational Championship game.  Colin Martin (3-2) got the mound call for the Pirates, pitching a complete seven inning game, striking out nine, allowing seven hits, one walk, and one earned run to pick up the Championship bout win versus Benton Central 5-1.  Benton Central’s (16-10) lone run came in the bottom of the third, as seven team hits produced one run behind Charlestown’s defense.  Charlestown scored five runs on five hits and committed one error; the Bison committed two in the same game.  Pirate Junior Dewey Cardwell led the winning team at the plate, finishing two for four with a double; while Junior Tanner Wesp finished 1 for 3 with a home run and two RBI’s.  “Today was a great day of baseball.  We showed a lot of heart in the first game and Colin pitched extremely well in the championship game.  Great team wins today”, summarized Pirate Skipper Ricky Romans.

The Pirates (20-6) will return home Sunday and host New Albany on Monday at 11:00 am; a game that will be broadcasted by CPPSB at www.CPPSB.com; then begin Sectional play Wednesday at North Harrison High School versus Silver Creek (5:30 pm first pitch).