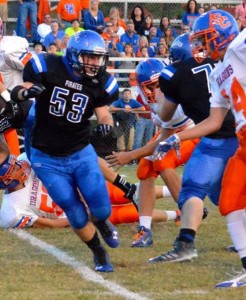 The Charlestown High School Athletic Department would like to announce and congratulate Senior Cody Johnson, Senior Eli Daniel, and Junior Quiton Fetz for recent recognition for their performance on the 2014 Pirate Football Sectional Championship team.  Cody Johnson has been named to the 2014 AP Class 3A All-State Football team as a Defensive Lineman.  Cody, the only Clark/Floyd player to be named to the AP’s All-State List, finished this season with 12 1/2 sacks and 88 tackles (including 61 sole), while averaging 6.8 per game.  Johnson also was selected to the All-Mid-Southern Conference team and won the team’s Mental Attitude Award.  Head Coach Darin Ward said Johnson has a “great motor and is the hardest worker on the team.”

Congratulations to all three of these men and their contributions not only to Pirate Football, but also their representation of Pirate Nation and the Charlestown community.