Glover Headed to Bellarmine to Cheer 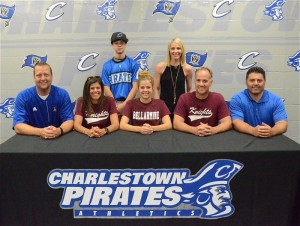 Charlestown High School Pirate Senior Cheerleader Taylor Glover gathered with family and school administrators Wednesday evening to finalize her announcement to attend Bellarmine University in Louisville, Kentucky.  Glover has participated in competition cheer and softball during her entire career at Charlestown High School.  Glover is undecided in her major courses of study at this point, but summarized her interest in Bellarmine based on its location, and existing National level sports programs, including competition cheerleading.  Glover recently received award notification of a substantial academic Bellarmine scholarship, and has already successfully completed the try-out process to become a Bellarmine Knight cheerleader.  Joining Glover during her announcement, and as shown seated on either side of her in above photo are her parents Denise and Bryan Glover.  Seated left end is Charlestown High School Athletic Director Chad Gilbert, and seated at right end is Charlestown HS Head Cheer Coach Mark Sherrill.  Standing left to right behind Glover is her brother Jacob and Charlestown HS Assistant Cheer Coach Amy Pearce.  When asked to give advice to up and coming student athletes, Glover stated that its important not to sell yourself short; rather keep using determination to put in the work to accomplish your goals.  Glover concluded by thanking her parents, coaches, and God for supporting and standing with her.  Pirate Nation congratulates Senior Taylor Glover on her college plans and outstanding representation as a Charlestown Pirate.