Lady Pirates Open with a Road Win at Madison 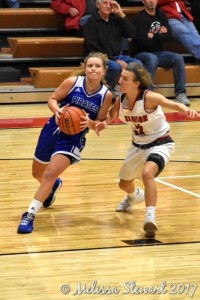 The Charlestown Lady Pirates traveled to Madison on Saturday to open the 2017-18 basketball season and they brought home a victory. The Lady Pirates were led in scoring by Samantha Matthews who finished with 14 points and 4 rebounds.  Other scorers for the Lady Pirates included Bri Harvey with 9, Erin Kimbrell with 7, Karston Watson with 5, and Gabi Gagnon with 4.

The Lady Pirates will be back in action Saturday evening when they host 2017 state runner-up North Harrison,  a team led by 6-1 forward Lilly Hatton who comes into this season 2nd in the state as last year’s single season shot blocker. Hopefully the power play of Samantha Matthews who averaged 15.9 ppg and Bri Harvey who averaged 13.9 ppg last season, along with a solid support cast will be enough to overcome Powerhouse North Harrison.

Charlestown Lady Pirate Basketball Head Coach Scott Matthews has announced a parent meeting for Thursday, September 28th, beginning at 7 pm in the CHS Sports Arena. The meeting will be very informative for parents of girls planning on trying out for the CHS Girls Basketball program this upcoming season. 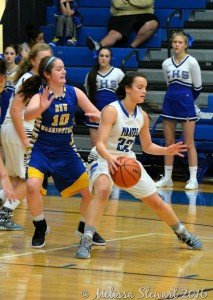 The Charlestown Lady Pirate Basketball team won their fifth straight game while defeating conference rival Brownstown in Friday’s Sectional Semi-Final at Corydon High School.  The victory advances Charlestown to Saturday’s Sectional Championship game versus North Harrison, set to tip at 7:00 pm at Corydon High School.  Generally it is difficult to defeat the same basketball team twice in one season; especially when the first contest was a close victory as the Lady Pirates did against Salem and Brownstown last month.  Charlestown has shown had it can be done, dispatching Salem Wednesday evening in the Sectional and again Friday night against Brownstown, 54-45.

The Lady Pirates trailed the majority of the first half, but remained in striking distance to a 23-22 halftime advantage.  The second half showed that Charlestown recognized what was keeping them in the game during the first half, and stuck with it.  The Lady Pirates surged ahead three times, generally maintaining a two possession game until the final minutes when Brownstown was forced to foul and Charlestown to hit free throws sealing the deal.

Charlestown was led in scoring by Junior Samantha Matthews, who led all scorers with twenty-one.  Junior Erin Kimbrell took command of the situation with about four minutes remaining when Matthews got hit with her foul foul, slowing her pace a bit.  Kimbrell asked for the ball, hustled to the ball and drove the lane drawing tough fouls to give the Lady Braves to much to handle.  Kimbrell finished the game logging 11 points and was named the Coyle Chevy, GMC, Buick and Coyle Nissan Player of the Game by Pirate Pride Sports Broadcasting.  Junior Gabi Gagnon also stepped up for the Lady Pirates, adding nine points and some crucial assists to improve Lady Pirate momentum.

Charlestown will now face Class 3A #1 North Harrison in Saturday’s Corydon Sectional Championship Game.  Come out Pirate Nation and help support the Lady Pirates as they play not only the program’s 11th sectional title, but also the right to play at home for the Regional round next Saturday.  Fans who absolutely can’t make it to Saturday’s game can listen to live Pirate Pride Sports Broadcasting coverage beginning at 6:30 pm at www.CPPSB.com or via the CPPSB app on smart phones or mobile devices. 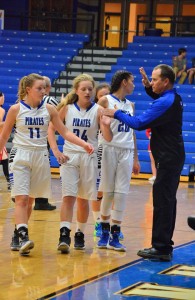 The Charlestown Lady Pirate Basketball team opened Class 3A Sectional #30 play Wednesday evening, out lasting scoring surges by senior-laden Salem, for a 55-51 victory.  Charlestown will now face Brownstown in Friday’s 7:30 pm tip Sectional Semi-Final.  Brownstown defeated Scottsburg Wednesday evening, to earn their Semi-Final bid.  The Lady Pirates defeated the Lady Braves on January 7th by one point after two overtimes.  A nip and tuck first half found the Lady Pirates leading Salem 27-19 at halftime Wednesday evening.  Charlestown fought off turnovers the entire game, provoked by an active Lady Lion defense; however the Lady Pirates shot over 90 percent from the free throw line to keep them in the game.  Charlestown outscored Salem 10-0 to open the second half, but then allowed the Lions to surge back and take a two point led in the third.  Despite a loosely called game in the first half, players were caught off guard in the second when officiating foul calling tighten.  Salem’s game plan became complicated with foul trouble, but stayed within striking distance until the final minute of the game when free throws iced it for Charlestown.  The Lady Pirates were led in scoring by Junior Samantha Matthews, who finished the game with 22 points; and Freshman Peyton Crace added nine.  Freshman Karston Watson came up with big plays at late in the game while also scoring eight points respectively.  Matthews and Watson were named the Coyle Chevy, Buick, GMC and Coyle Nissan Players of the Game by Pirate Pride Sports Broadcasting.  Listen to the game broadcast archive at www.CPPSB.com anytime.  Pirate Pride Sport Broadcasting will cover Friday’s Charlestown-Brownstown semi-final game live from Sectional #30 host Corydon High School; however a large crowd cheering the Lady Pirates on was missed Wednesday night, and preferred the rest of the way.  Charlestown-Brownstown is Friday’s second Semi-Final game, as Corydon and North Harrison will tip at 6:00 pm in the first Semi-Final matchup.

The Charlestown Lady Pirate Basketball team will begin Class 3A Sectional #30 play in the 42nd Annual State Tournament, Wednesday evening February 1st at Corydon High School.  The Lady Pirates (13-10) will take on Salem Wednesday evening at approximately 7:30 pm; or twenty minutes after the conclusion of the 6pm tip game between Brownstown and Scottsburg.  The winner of Charlestown vs. Salem will face the winner of the Brownstown vs. Scottsburg game Friday night in the 7:30 pm Sectional Semi-Final.  Charlestown defeated Salem (14-10) at home on January 19th, 57-52; so all indications is that Wednesday’s game should be a good match-up.  Sectional single night tickets are $6.00 each while all session tickets are $10.00 each.

If you absolutely can’t make it to the game, Pirate Pride Sports Broadcasting will cover Charlestown’s play in the girls sectional live from Corydon High School beginning at 7:15 pm Wednesday evening.  Listen on-line at www.CPPSB.com or on the free CPPSB app on your mobile device.  Join CPPSB in wishing our Lady Pirates all the best in Sectional play and be there Wednesday evening to help cheer them on to Friday’s Semi-Final round.

The Charlestown High School Athletic Office has announced a special ticket offer for CHS students wanting to attend Homecoming basketball games this week.  Ticket sales will be conducted at CHS Thursday during first and second lunch.

Students will have the opportunity to buy a five ($5) dollar ticket that will allow them to attend all 3 home basketball games this week.

Again, tickets will only be sold during 1st and 2nd lunches…this special will not be available at the door on any of the 3 nights. Tickets must be purchased in advance.

Don’t miss this opportunity to support CHS during homecoming.