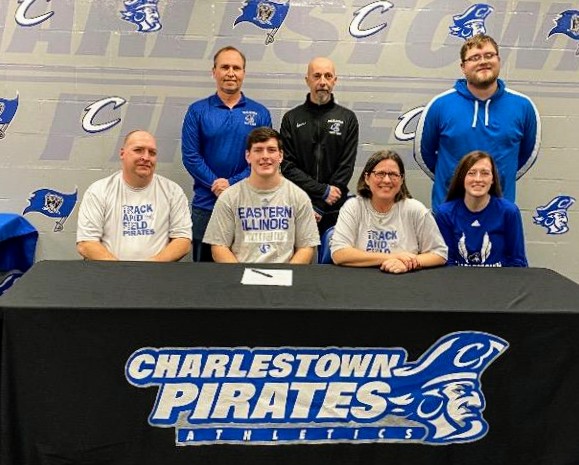 Last night, Charlestown senior football and track star Bo Braunecker gathered with family and friends to sign his national letter of intent to continue his education and track career at Eastern Illinois University during the 2020-21 season.

When asked about his opportunity to play at the next level with the Panthers, Bo said, “After my first visit at Eastern Illinois I knew that was the place I wanted to go, not because it was division one, but for the reason that I felt that I fit in with the team and it would help shape be into being the man that I want to be. The team reminded me of the track family at CHS. Charlestown’s track team is not just a team, but we are a family as well and I saw this with Eastern Illinois Track team. Everyone made me feel welcome. It just felt like a home away from home. ”

The Charlestown High School athletic department and WPMQ, The Pirate Network congratulate Bo and wish him a healthy and prosperous future as an Eastern Illinois University Panther.