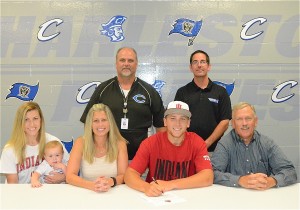 Charlestown Pirate Baseball 2016 graduate Tanner Wesp has signed a letter of intent to play college baseball for the Indiana University at South Bend.  Wesp, who was a multi-sport standout throughout his high school career at Charlestown, predominantly dominated first base play for the Pirates over the past three seasons; while always posing the threat to knock a ball well out of the park.  During his signing this past week, Wesp said that he really “loved the place” when making visit to the college after the Titans Head Coach notified him of interest.  Tanner explained that it became obvious to him that the baseball program at South Bend is a high priority within the school, and added that “the facilities are top notch”; all which contributed to his desire to play for the Titans.  When asked what advice he would give to high school athletes thinking about playing at the college level, he explained that starting recruitment activities, “especially getting your name out there early” is important.  The IU South Bend Titans play baseball in the very competitive Chicagoland Collegiate Athletic Conference of the NAIA.  Tanner’s parents, Jim and Jill Wesp, his sister Emma, nephew Grayson, as well as Coaches Romans and Hester were all in attendance during the signing event.  Older sister Sarah was unable to attend, but only in physical presence; as the entire family is tight-knit and supportive.  “Tanner is a good kid, good student; but on the field they’re (South Bend) is getting a heck of baseball player.”  Commented Pirate Baseball Head Coach Ricky Romans.  “He’s got the skills, baseball knowledge, and understanding of the game (especially at first base) to be beneficial to their program”, concluded Coach Romans.  At the conclusion of his signing, Tanner stated “I want to thank everyone who has supported and helped me, my coaches (especially Coach Romans and Coach Hester), my parents and sisters, and Charlestown fans”.