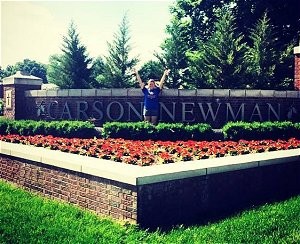 Lady Pirate for Life and former Charlestown Softball standout Alli Webster, who just completed her second year at Wabash Valley Junior College, is now headed to NCAA Division II Softball powerhouse Carson-Newman University.  Carson-Newman has an enrollment of approximately 2000 and is located in Jefferson City, Tennessee; thirty minutes northeast of Knoxville.  The Softball program, over the past six years, has consistently averaged over thirty wins per season as well as a regular in the NCAA Southeast Regional.  While at Wabash Valley, Webster led her team to the NJCAA National Championship Tournament (7th out of 16 teams) in Utah, was named the 2015 Region 24 College Player of the year with a final season pitching record of 24-4, and recently named NJCAA 2015 D1 Softball All-American.  When Webster was asked what attracted her to Carson-Newman to continue her academic as well as softball athletic career she responed:  “Carson Newman was a very easy pick for me.  I am studying education and they have one of the best education programs in the country.  They are also a NCAA division 2 powerhouse in softball with a head coach that has won over 1000 games. She is needing a starting pitcher and I plan on filling that spot for her.  The campus is small and beautiful. The people were all so nice. I felt right at home there.”  Webster, who originally had committed to Purdue-Calumet; reconsidered after her softball performance this past season provoked additional offers to roll in.  Webster, who is  officially with Carson-Newman this past Wednesday with her parents.  Webster is a 2013 graduate of Charlestown High School, an Indiana All-Star, and the daughter of Jeff and Cindy Webster.  For more information about Carson-Newman Athletics, and to continue following Webster’s Softball progress, visit www.CNeagles.com.