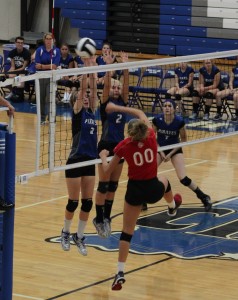 The Charlestown Lady Pirate Volleyball team improved their season record to 4-6 Wednesday evening when hosting and sweeping the Madison Shawe Hilltoppers 25-14, 25-21, and 26-24.  “Tonight was a much needed win for us.  This was the first time we have played Shawe since I have been coaching at Charlestown and we were not sure what to expect.  The girls played steady through some different line-up changes and kept their composure to come back in the third set despite being down late in match”, commented Head Coach Tammy Nuxoll.  The Charlestown offense was led by Kaia Reid with 13 kills followed by Amelia McCoy and Kiersten James with 6 kills each.  Maddie Nuxoll helped the offense with 22 assists.  The defense was led by Amelia McCoy with 11 digs with Chrissa Ledbetter and Maddie Nuxoll a close second with 9 a piece.  Kaia Reid also had five aces while McCoy and Ledbetter had three each.  “It was a good overall team effort.  We will need to take this momentum into our conference match against North Harrison tomorrow night at home”, concluded Nuxoll.  The Lady Pirate Junior Varsity team also recorded the sweep agaisnt Shawe, winning their match 2-0 (25-8, & 25-13).  For more information about Lady Pirate Volleyball, go to www.PiratePride.BLUE/Volleyball.