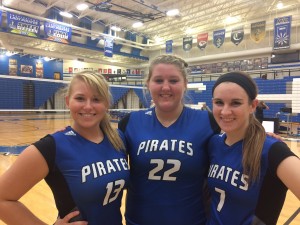 “I’m super proud of my team tonight, especially my seniors-Alex Chester, Emalee Craven and Amelia McCoy. They have been good leaders this year, and I’m glad we could get the win for their last home match.  I’ve got a great group of girls and it’s hard to believe our season is coming to an end”, commented Lady Pirate Head Coach Tammy Nuxoll.  The first two sets of the evening saw Charlestown playing pretty even with the Rebels until about 16 or 17 points; before the Lady Pirates decided to make a push to finish the match.  The third set Charlestown finally picked up the intensity early on and kept the Rebels to only 13 points.  Kaia Reid had a big night offensively with 21 kills and three service aces.  Emalee Craven was second with 8 kills and three aces.  Maddie Nuxoll did a nice job of using her hands to distribute 34 assists and also had two aces.  Defensively, the team was led by Chrissa Ledbetter and Kaia Reid who each had 12 digs.  Chrissa also did a nice job in serve reception.  The team will get a much deserved rest before we go into our last tournament at New Washington on Saturday October 8th, before Sectionals.  The Lady Pirate Junior also improved their season record, sweeping the Rebels 25-16 and 25-16.