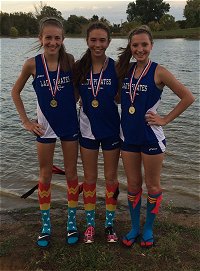 The Charlestown HS Cross Country team ran at New Albany’s Community Park Tuesday evening, in the annual Providence Invitational.  Frosh Katie Rhodes led the Lady Pirates and was the individual girls champion; for her second win of the year!  Senior Whitney Andrews ran 4th and Gabi Gagnon 13th to round out the Lady Pirate medal winners!  The Lady Pirates placed 3rd as a team; even without their #3 runner Alysha Flaget, who was under the weather.  “Had Alysha been available it would have definitely been a different (team) outcome, but we want her ready for sectional on Saturday” commented Coach Jerry Doyle.  The Pirate Cross Country team was led by Seth Parker, who medaled by placing 13th during the race.  “I’m looking forward to Sectional and qualifying for another Regional as a team”, concluded Coach Doyle after Tuesday’s outing.