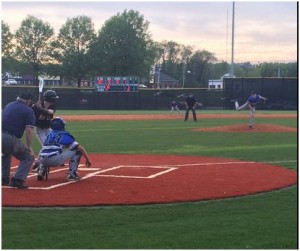 Charlestown Pirate Baseball hosted their MSC rivals from Brownstown Thursday evening to close out conference play for the season.  The game, originally scheduled for May 11th had been rescheduled due to wet field conditions, proved that this year’s young Pirate Slugger team have potential to be a sleeper opponent in next week’s sectional.  Sophomore Brendan Brainard (3-0) got the call tonight, pitching seven complete innings, earning the win after walking two and striking one out, while the Pirate defense equalized five Brave hits.  Brownstown (14-6 & 6-3 MSC) scored one run in the top of the second, before being denied home plate the remainder of the game.  Brave pitcher Maxie (4-1), recorded his first lose of the season while visiting Charlestown (7-16 & 3-6 MSC) Thursday evening; as both team logged two errors each.  The Pirates tied the game in the bottom of the sixth, but found a hero in Junior Jacob Doherty who finished the game 1-2 at the plate including a double and the game winning run in the bottom of the seventh.  “Couldn’t be more proud of the guys for the heart and effort tonight.  We didn’t play mistake free but they showed a ton of heart and that’s what matters most.  Brendan pitched exceptionally well and gave our team a chance.  This was a quality win for our young ball club”, commented a pleased Pirate Head Coach Ricky Romans.  The Pirates will travel to and compete in the Bedford-North Lawrence Invitational Saturday, before opening Sectional play Wednesday versus Sectional host Silver Creek.