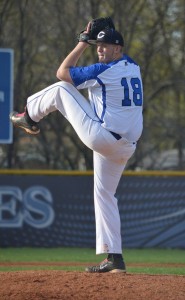 The Charlestown Pirate Baseball team improved to 8-9 on the season with an solid 10-3 victory over Floyd Central (8-6) while hosting the Highlands Friday evening.  Coming off dominating wins over Crawford County and Clarksville, the Pirates had to make a decision Friday night.  Either look past the tricky non-conference match-up for something more obvious; or, take it the Highlanders, Class 4A depth and all.  The Pirates apparently chose the latter; while hitting the ball with greater confidence.  Charlestown scored four runs in the opening inning, then five more in the next two innings to put the game out of reach quickly.  The Highlanders scored all three of their runs during the first two innings, despite recording seven hits; the Pirates scored their ten runs off eleven hits, despite committing five errors.  Kelly Rider (4-3) got the complete win from the mound, retiring five Floyd batters and walking only two.  Tanner Wesp finished the game 2-2 from the plate including a double and RBI, while Brandon Love, finished 2 for 4 with four RBI’s.  Zach Whitten added another double and two RBIs.  “Great team win tonight!  Kelly did a great job tonight on the mound and our offense came up with some good timely hits”, commented Head Coach Ricky Romans.  The Class 3A #11 Pirates now set their sights on Monday’s home match up versus Mid-Southern Conference arch-rival and Class 3A #2 Silver Creek.  First pitch is scheduled for 6:00 pm.