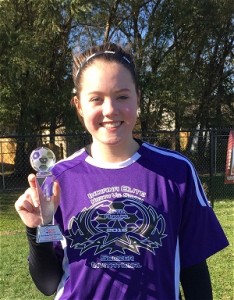 The Charlestown Lady Pirate Soccer team was represented this past Sunday by two teammates invited to play in the annual Indiana Elite North vs South game in northern Indiana.

Lady Pirates Tayte Motsinger and Ilayah Keltner both scored goals for the South team even though they came up short against the North, at a 5-4 final.

Tayte also had two assists and was named MVP of the match.  Congratulations to both Tayte and Ilayah on their successful representation of Pirate Nation.