In last night’s volleyball match at Silver Creek, the Lady Pirates lost 2-0 to a top ranked team in the state but it was not without positives from Coach Nuxoll.

“Tonight we played against a really good Silver Creek team. They are ranked in the top ten in the state for a good reason. Despite the scores, I’m was pleased with my team’s composure on the court. They still worked for points and maintained a positive attitude and showed good teamwork. Kayleigh Smith led the offense with four kills and showed good leadership on the court,” reported Coach Tammy Nuxoll.

The Lady Pirates will host Madison Shawe on Wednesday. JV will begin at 6:00. 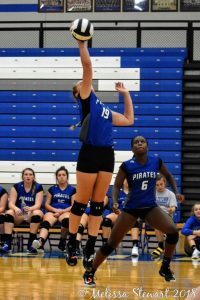 The Charlestown Lady Pirate Volleyball team (1-0 & 1-0 MSC) opened their 2018 season with a well earned and hard fought Mid-Southern Conference victory over the visiting Corydon Central Panthers (3-2) 25-21, 23-25, 25-20, 20-25, & 15-4.  The Lady Pirate Junior Varsity team also outlasted their counterparts (2-1) 25-15, 22-25, & 15-10 in the evening opener.
“Tonight was a hard fought match between two MSC Conference teams. There was lots of good play on both sides of the net, and I’m proud of how this young team played together in their first match of the season. Our program lost 8 seniors and only returned one starter, so most of these players are new to varsity volleyball.  Their composure in a five set match is promising and I’m glad to see how they stuck together and showed some excitement to get the win. This team shows a lot of potential and I’m looking forward to seeing what they can accomplish together. Preliminary stats show that freshman Kyra Sharp led the team in kills with 12 while Kayleigh Smith and Korea Tutt had 6 kills each. Lanae’ Crowe did a nice job setting for us. Peyton Crace contributed 7 kills and Abbi East led the serve reception. Savannah McClellan led the team with 6 aces and had 9 service points in the deciding set. We will work on a few adjustments in practice tomorrow before we play a tough Jeff High squad on Thursday”, summarized Lady Pirate Head Coach Tammy Nuxoll. 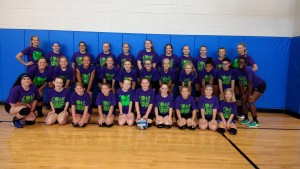 Charlestown Pirate Volleyball will be hosting a summer volleyball camp at Charlestown High School starting Monday, June 4th and running through Thursday, June 7th.  Camp for boys and girls entering 1st-5th grade this school year will be conducted each day from 9:00-10:30 am; and the camp for boys and girls entering grades 6th-9th will be conducted each day from 11:00-12:30 pm.  The camp cost is $40 per camper and registration can be completed at the door on the day of camp.  Camp registration is available for download and print by CLICKING HERE.  Questions regarding this camp opportunity should be directed via email to Coach Tammy Nuxoll at tnuxoll@gmail.com for more details.

Lady Pirate Vincent Signs with Saint Mary of the Woods 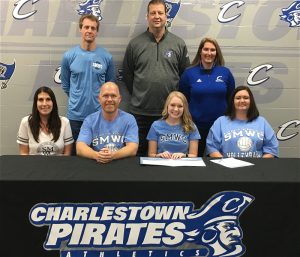 Charlestown High School Lady Pirate Volleyball Senior Hannah Vincent recently gathered with family and school administrators to officially announce and sign to attend and play volleyball at Saint Mary of the Woods College in West Terre Haute, Indiana.  When asked about her decision, Hannah spoke highly of their nursing program, which is her career interest; and stated that the “campus is beautiful”.  When asked, Hannah provided the following advice for student athletes entering high school:  “Work hard on the court, but harder in the classroom to help open opportunities that keep up with your (athletic) skills.  Hannah is a four year varsity letter player who finished her Senior year of play with 259 digs and 29 aces before participating in the Indiana Elite North vs. South All-Star Game last November.  Hannah also is a National Honor Society member and will graduate with Academic Honors and an Associates Degree when finished with high school in the spring.  Hannah, seated front and center with parents (left to right) Jennie Vincent, Jeremy Vincent and Elizabeth East, was joined by Saint Mary of the Woods Volleyball Coach Stephen Beeler, Charlestown HS Athletic Director Chad Gilbert, and Charlestown HS Volleyball Coach Tammy Nuxoll.  Coach Beeler stated that Hannah’s personality is “perfect for our program, as we have a very close-knit team”.  “She’s got a great work ethic….I see more potential, and think I can help her reach her potential” (at Saint Mary of the Woods).  Charlestown HS Volleyball Head Coach Tammy Nuxoll, who has coached Hannah throughout high school, stated: “Hannah has worked hard to improve over the past four years, as her serving was a real asset to our (CHS) program. Saint Mary of the Woods is great for up and coming high school program athletes, as it gives more players the opportunity to take on the next level of competition; and I definitely think Hannah is up to that task, as a college freshman.  Congratulations to Hannah Vincent, who plans on beginning her college journey at Saint Mary of the Woods this fall; and thank you for your hard work and outstanding representation of Pirate Nation. 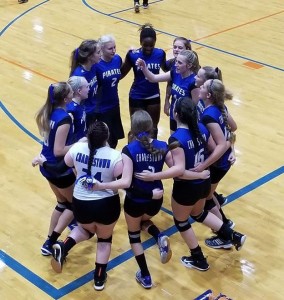 Many of the goals this year’s senior laden Lady Pirate Volleyball team were accomplished, and on top of continued program growth and success in Head Coach Tammy Nuxoll’s fifth year.  Charlestown finished 21-10 this season, 18-12 last season, and 7-22 in her third season after over a decade of program losing seasons.  Not withstanding losing eight seniors this year, the current success is promising as evidenced by continued Junior Varsity success; and four players with quality varsity experience and talent.  Saturday morning, Charlestown’s season ended when falling to Brownstown in the semi-final round of the Silver Creek Sectional (10-25, 14-25, & 13-25).  The program did gain eight families of supporters that likely will continue to follow a program they believe in for years to come.  “It’s always difficult when your season comes to end.  Brownstown has a good program, and they were the better team today.  Despite the loss, I cannot say enough about this team and the senior leadership we had this season.  We will definitely feel the impact of losing these 8 seniors.  They have been the backbone of the program, and have left high expectation for those that follow them.  I’m proud of this entire team and the 21-10 record they earned this season”, summarized Head Coach Nuxoll.  Senior Kaia Reid led the offense against Brownstown with 9 kills and Hannah Vincent led the defense with 11 digs.  “This program will work hard to continue its positive success”, concluded Coach Nuxoll.  Photo courtesy of Jeremy Vincent. 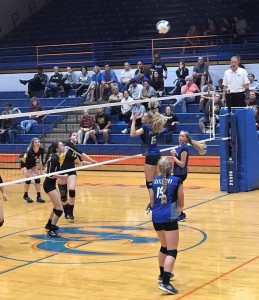 The Charlestown High School Lady Pirate Volleyball team (21-9) advanced to Saturday’s Class 3A Sectional #30 Semi-Final round by dispatching Salem 28-26, 25-21, & 25-17 Tuesday evening at Silver Creek.  “I am happy that we were able to get a round one win under our belt.  This is the first post season win since I took over the program five years ago, so I am proud of our program.  We did not play our best tonight, but I’m glad we were able to stay composed when Salem came back to make the matches close in the first and second sets.  Salem’s #10 (Brown) gave our passers trouble with her serve, and Salem was able to cut into some large leads that we had, but we continued to hang on for the wins. We are still battling with a few injuries, so I’m hoping not playing again until Saturday will help us have more time to heal,” summarized Lady Pirate Head Coach Tammy Nuxoll.  Charlestown’s offense was led by Kaia Reid, who finished the game with 11 kills; and Fresham Kayleigh Smith who had 9 kills on the night.  Senior Maddie Nuxoll contributed 30 assists and 15 service points.  The defense was led by Senior Chrissa Ledbetter’s 17 digs; while Seniors Molly Braunecker and Hannah Vincent added 12 digs each respectively.  “We will have to put it all together and play our best in the next round against Brownstown”, concluded Coach Nuxoll.  Charlestown and Brownstown, who drew the sectional bye, will clash in Saturday’s 11:00 am Semi-Final game at Silver Creek High School.  If you can make it to the game, you can listen to it live at www.CPPSB.com.  Photo courtesy of Michael Thibideau.