Due to the forecast of impending bad weather, including torrential rains for Friday, the Charlestown HS Athletic Department has announced the following schedule changes effecting Pirate Football, Lady Pirate Volleyball and Pirate Soccer.  Lady Pirate Volleyball hosting Silver Creek in the CHS Sports Arena will begin at 5:30 pm Thursday instead of 6:00 pm (Junior Varsity first, followed by Varsity).  Pirate Soccer hosting Scottsburg on Dutch Reis Field will begin at 5:30 pm instead of 6:00 pm.  Finally, Pirate Football hosting Clarksville has been moved from Friday on Dutch Reis Field to Thursday evening with a 7:30 pm kick-off.

The Charlestown Pirate Soccer team traveled to Madison for a non-conference clash with the Cubs.  The Junior Varsity recorded a 5-0 win however the Varsity fell 1-3.  “Tonight was another game where we lost our concentration.  It was very unfortunate that the Pirate’s lost the help of their captain due to a head injury.  Madison was an organized team and put up a difficult match, winning 3-1.  Hopefully the Pirate’s learned some more things tonight and will continue to put forth a good effort.  I have high hopes for our upcoming home game”, summarized Pirate Head Coach Christian Martinez.  Charlestown sole goal came in the second half at the 5 minute mark by Pascual Gonzalez with an assist by Andrew Mattingly.  The night ended with the Pirates taking 22 shots, which 10 were on goal with Madison taking 13 shots, with 7 on goal.  Pirate Goalie Matt Parrella had 4 saves and allowed three.  The Pirates will next host Scottsburg in MSC play.

The Pirate Soccer team traveled to Corydon for their conference opener Tuesday evening, and second of a three in a row stretch this week.  “Tonight, we lost our first game of the season, against Corydon 5-1, and they proved to be a very strong team”, commented Pirate Coach Christian Martinez.  The Pirates scored an early goal at the 1 minute mark by Sergio Bolanos with an assist from Bryce Wray.  “I got the impression that the Pirates became overconfident at that point.  We lost our positions in the field, allowing Corydon to win”, explained Coach Martinez.  Corydon tacted on two more goals in the first half to take a 3-1 lead to halftime.

“During half time, we had our normal discussion about the errors made in the first half and how to improve in the second half.  However, it just didn’t work out this time.  We continued to make the same errors, which cost us two more goals”, stated Coach Martinez.

After a post-game discussion with the team, “I feel they understand the areas that were not as strong tonight and know what they can do to improve.  I continue to be proud of this group and there was a lesson to be learned tonight. You win some, and you lose some.  I will never be disappointed when they try so hard”, Coach concluded.

The night ended with the Pirates taking 12 shots, which 6 were on goal with Corydon taking 20 shots, with 11 on goal. Our goalie Matt Parrella had 6 saves and 5 allowed.

Next matchup is:  Wednesday vs. Southern High School

No appointment is necessary. Patients must be signed in by 8 a.m. and will be seen on a first-come, first-served basis. Most major insurance plans are accepted. For more information, call 812.944.2663. 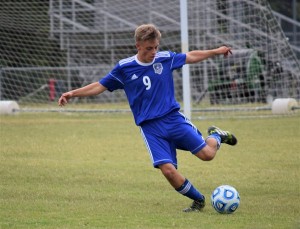 The Charlestown High School Boys Soccer Team traveled to Whorley Field in Jeffersonville Tuesday evening for a season opener match up against the River City Jaguars.  The Pirate Varsity squad defeated the Jaguars in a 5-0 shut out, scoring three goals in the first and two more in the second.  Bryce Wray started the Pirate scoring in the fifth minute of the first half, off an Andrew Mattingly assist.  Sergio Bolanos scored two of his three game goals in the first half, one in the thirteenth minute (assist to Gryphon Brading) and the other in the twentieth minute (assist by Bryce Wray).  Andrew Mattingly scored his second goal of the game in the ninth minute of the second 2nd half on a free kick; before Sergio Bolanos scored for the third time in the twenty-third minute of the second on another Mattingly assist.  “We had a good start to our season last night with a strong win over River City Jaguars.  The boys played hard and did a good job.  While we are not 100% at the level I want them to be yet we are close.  We have been working hard all summer to try to win our game so now that we have that goal achieved we will focus on game two against Henryville”, commented Pirate Soccer Head Coach Christian Martinez.  The Pirate Junior Varsity squad also started the season with a win, defeating their River City counterparts 3-0 Tuesday evening.  Next week’s matchups are at Henryville on Monday, at Corydon on Tuesday, and at home versus Southern High School on Wednesday.