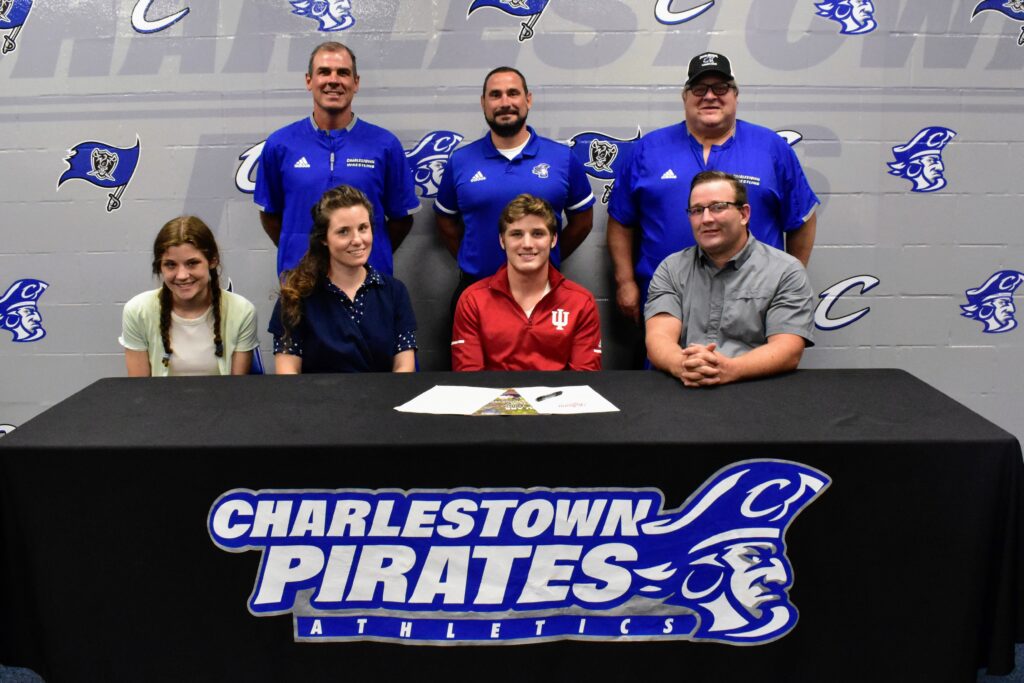 Recently, Charlestown’s 2022 graduate Ben Phillips was joined by family, teammates, and coaches to sign his letter of intent to attend school and wrestle at Indiana University. At the time of his celebratory signing, Phillips had already begun classes in Bloomington, working toward a degree in Exercise Science. But, as always, it was a pleasure to have him back in Charlestown for the evening.

Most know that Phillips was a very decorated athlete at Charlestown as a two-time state medalist, conference, sectional, and regional champion, record holder, and more who had received multiple offers from colleges and universities. When asked about his decision to go to Indiana University, Phillips said: “I really love the coaches, the team, and the training environment. They have so many resources to help me become the best I can be! Bloomington is also closer to home than most of my other options, so that helped in the decision making process. I am super excited for my future at Indiana, and I am thankful for everyone who has helped me get to this point. Go Hoosiers!” Phillips is one of twelve incoming freshmen or transfers to the team.

Charlestown wrestling coach Adam Doherty shared the following sentiments on Phillips: “Ben has been amazing to coach over the last four years.  He broke multiple school records, including the only CHS wrestler to place twice in the State tournament and tied the highest finish of 4th.  Ben always put in the work and constantly pushed himself to be better.  He was a great teammate that wanted to see everyone succeed as much as he did himself.  I am so excited to see his hard work pay, and can’t wait to see him do big things at Indiana University.”

Founded in 1820, Indiana University Bloomington is the flagship campus of IU’s seven campuses and two regional centers statewide. Innovation, creativity, and academic freedom are hallmarks of our world-class contributions in research and the arts. As a public ivy league institution, Indiana University Bloomington was ranked in the top 40 public national universities, tied for 36th, and was tied for 89th among all colleges and universities in the 2019 U.S. News and World Report Best Colleges rankings.

The Charlestown High School athletic department and WPMQ, The Pirate Network congratulate Ben and wish him a healthy and prosperous future as an Indiana Hoosier.